NOT THE DEVIL’S WORK: REVERSING CLUBFOOT DEFORMITIES IN CHILDREN

Most mothers agree that the first meeting between mother and child invokes overwhelming joy. This was true for Joy Chinedu the first time she carried her baby, Precious, examining every part of her with awe and wonder, two hours after giving birth in August 2014 at a public primary health center in Ndoro-Oboro town, southeast Nigeria’s Abia State.

This joy waned the moment she observed the baby’s feet. Both of Precious’s ankles were twisted inward with the foot turning downward. She was born with a deformity called clubfoot, the most common muscle and skeleton-related deformity among children and one of the predominant present-at-birth defects affecting nearly 200,000 new-borns every year globally.

The deformity arises from poor development of the ankle bones, muscles, and tendons in the womb. The exact cause is unknown, but researchers suggest a combination of genetic and environmental factors like family history of clubfoot, smoking and certain medications during pregnancy, increase the risk. About 50% of clubfoot occurs on both feet, with boys being twice as affected. Over 80% of global annual prevalence occurs in low-income countries where access to effective treatment is limited, including Nigeria, where 9,000 children are born with clubfoot yearly. Untreated clubfoot results in lifetime disability, causing pain, difficulty walking, stigmatisation, and limited access to education and economic opportunities.

‘The devil’s work’
At the hospital in Ndoro-Oboro, a midwife referred Chinedu to a private hospital in Umuahia, the state capital, where Precious could be treated. Chinedu travelled from her home in Okwe to the referred hospital with Precious, paying N30,000 for a month’s treatment.

However, there was no change and Chinedu was told that the treatment had to continue for many months for a positive outcome. Chinedu, a petty trader retailing rice and beans and her husband, a casual worker at building sites, had no money to continue. Therefore, they concluded that their daughter’s condition was spiritual, with no possible solution.

“I said it was the work of the devil. I felt like, when she grows up, she wouldn’t be able to achieve her dreams with that condition,” Chinedu recalls. “She would find it difficult to get a good husband because men would be scared of getting such a woman as a wife.”

Like Chinedu, many Nigerian families who have children living with this disability do not complete treatment due to myths, lack of funds and limited access to effective treatment. “Many people grow from childhood to adulthood with the same clubfoot without attending proper treatment,” said Joseph Asuquo, secretary of the Nigerian Orthopaedic Association.

Solution at last
In August 2018, Chinedu’s family relocated from Okwe to Amizi-oloko Town, Abia State. She was also pregnant with a third baby, having had a second clubfoot-free baby after Precious. It was heart-wrenching for her when the third baby, Marvelous, came out carrying clubfoot in both feet. Thankfully, this time, she met some good luck.

While visiting Okwe with Marvelous two months after delivery, a female acquaintance saw the boy’s feet and told Chinedu that the defect could be corrected for free if she took him to the Federal Medical Center (FMC), Umuahia, on a Thursday. The lady showed her the feet of her own son who was being treated, explaining that a US-based non-profit called Miraclefeet was sponsoring the treatment.

The following Thursday, Chinedu travelled to FMC, Umuahia with Marvelous. After signing a consent form, the process that would transform Marvelous’ feet began.

Miraclefeet’s adopted method
At FMC Umuahia, clinic workers treat clubfoot using a nonsurgical method called Ponseti, which utilises correction and maintenance phases. During the 5–8 weeks correction phase, a caregiver gently manipulates the foot once weekly, stretching it to the correct position. Each manipulation is immediately followed with casting two to three layers of plaster of Paris or POP (a powder-like plaster applied after being soaked in water and capable of sticking when dry). It is less expensive, and 98% effective, research published in the Biomed Central Journal concludes, working best for children under-two.

Correction phase ends with the corrected foot looking normal, but if not maintained for about three years, a relapse is likely. So maintenance is mainly about the child wearing a brace comprising a special shoe that is clipped to a bar. “The degree of the bar stretches the leg upward to maintain the correction,” said Uchenna Egbe-eni, Miraclefeet’s national clubfoot coordinator in Nigeria. The child wears the brace for 23 hours every day for the first three months, then continues wearing it only while sleeping for 3-5 years.

In the treatment room, when manipulation and casting of Marvelous’ feet ended, Chinedu told the clinic about Precious, and asked if she could bring her on the next visit alongside Marvelous and she was encouraged to. Ultimately, both Precious and Marvelous had their deformities corrected free of charge. With out-of-pocket payment for a single case ranging between N200,000 and N400,000 in Nigeria, Chinedu would have been unable to afford it.

On a mission
In July 2018, Miraclefeet partnered with The Straight Child Foundation (TSCF), to improve access to effective clubfoot treatment in Nigeria through local public hospitals, selecting FMC, Umuahia, where TSCF’s founder, Peace Amaraegbulam, works as an orthopedic surgeon, and Abia State University Teaching Hospital (ABSUTH). In the beginning, staff of TSCF and volunteers from FMC and ABSUTH were trained on the Ponseti method.

The ABSUTH clinic was later closed due to repeated strikes embarked upon by state government health workers. FMC’s (federal hospital) has flourished with 15 volunteer clinic workers providing care to a minimum of 10 children every Thursday. For clinic workers, their biggest challenge is that older children need to maintain their correction surgery that elongates the tendons, not braces. Sadly, Miraclefeet’s support does not cover surgery for children above five. One surgery costs N250,000 Amaraegbulam said, and “many of these people have parents who sincerely cannot afford to pay for it. We wish it could be included in Miraclefeet’s programme.” Another challenge is the difficulty for some parents to follow instructions not to allow liquid touch the POP. Liquid softens it, causing a possible relapse. Yet, most parents adhere strictly, and are grateful for the programme. “People like me that have two children who had clubfoot; assuming I went through the payment, I don’t think I would want to conceive again because I would fear it would occur again,” said 33-year-old Chidinma Eke, whose two sons benefited.

Miraclefeet supports clubfoot treatment in 29 countries (15 in Africa) and have big plans. “Our long-term goal is to support the growth of a national program that is owned by and run by Nigerians, which ultimately results in clubfoot being integrated into the public health system as a child health priority. Increased collaboration, advocacy, scaling of clubfoot management skills, and active government involvement are required to succeed,” said Emmanuel Otoo, Miraclefeet’s Director of Programmes. The Rotary Club is another organisation that has been reported to have intervened in the treatment of clubfoot in Nigeria. In 2016, they adopted the Lagos State University Teaching Hospital (LASUTH) ClubFoot Clinic and provided financial support to ensure that victims of clubfoot deformity were treated free for two years, from 2017 to 2019. In Nigeria, the Federal Ministry of Health has recognised the Ponseti method as the treatment of choice for congenital clubfoot, but no government funding has been earmarked for this purpose.

The Global Clubfoot Initiative (GCI), an umbrella group of Non-Governmental Organisations (NGOs) working on the issue of clubfoot in Low- and Middle-Income Countries (LMICs), has developed a comprehensive plan to tackle the issue of clubfoot on a global scale. Their aim is to work with local partners and Ministries of Health to develop and support national clubfoot programs in 105 LMICs. Their goal is that all children born with clubfoot will be able to access high quality and effective treatment by 2030.

Corrected feet have the same movement, function and appearance as unaffected feet, and are pain free. Treatment transforms the lives of children like Precious born with clubfoot forever, giving them the opportunity to go to school, secure meaningful employment and ultimately, participate fully in their families and communities. 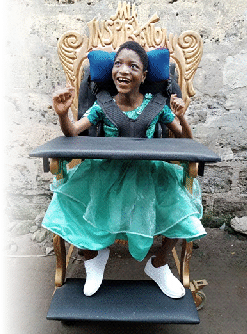